JUPITER
​Jupiter’s magnetic field is 14 times stronger than Earth’s. It is thought to be caused by eddy currents in Jupiter’s metallic hydrogen interior.   All of Jupiter’s major moons orbit within the magnetosphere. The solar wind causes a long tail in the magnetosphere on the lee side of Jupiter, which extends nearly to the orbit of Saturn. It is the largest structure in the Solar System. The strong magnetism surrounding Jupiter traps and accelerates charged particles, resulting in intense radiation belts which are hazardous to spacecraft.
Moons Jupiter has a total of 79 known moons. The four largest ones are called the Galilean moons - Io, Europa, Ganymede and Callisto. Their first verifiable observation was by Galileo in 1610 using the newly-invented telescope; however, it is possible Ganymede was observed in 362 BCE by Chinese astronomer Gan De. Galileo’s observation dealt a serious blow to the belief in a universe where all celestial objects orbited around the Earth. The Galilean moons change their positions on a nightly basis. They can be seen with any small telescope and most binoculars. 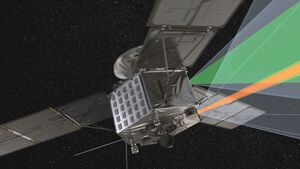 ​Missions There have been nine NASA-led missions to Jupiter: Pioneer 10&11, Voyager 1&2, Galileo, Ulysses, the Cassini-Huygens probe (with ESA and ASI), New Horizons,  and Juno. Only Galileo and Juno were orbital missions, while the rest were flybys. The Galileo mission entered orbit in 1995, conducting multiple flybys of the Galilean Moons as well as making many observations of the planet, including the impact of comet Shoemaker-Levy 9. The Juno spacecraft (shown) arrived in 2016 and is budgeted until 2025. It is intended to study Jupiter's composition, its atmosphere, magnetosphere, mass distribution and gravity.